A History of a Charity in Twenty Objects - #1 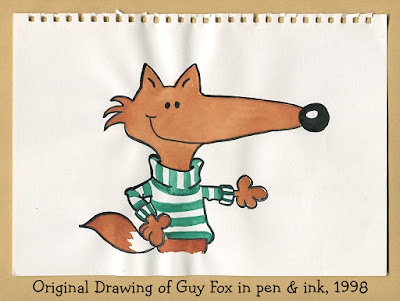 #1. Drawings of Guy Fox (Autumn 1998)
These pen and ink drawings are the very first iterations of the Guy Fox character. As you can see, he's gained a little weight since then – mostly in his nose! These days, we draw him in pencil, add the black lines with an old-fashioned dip pen and ink, and then scan the drawing so that we can colour it in Photoshop.

But back in 1998, when Kourtney Harper created Guy Fox, she and her husband were relocating from Chapel Hill, North Carolina to London and living out of a suitcase – no computer, no scanner, no software. So when inspiration struck, Kourtney popped in to see Mr Poole at Cornelissen.

Mr Poole was one of those living institutions who can only exist in a place like London. Dressed in pinstriped trousers, waistcoat, pocket watch with fob and immaculately-polished shoes, and wielding a walking stick that doubled as a grappling device, Mr Poole sold pen and ink drawing supplies. Nib holders, nibs, brushes and ink. That was it.

His shop occupied a corner inside Cornelissen and was furnished with massive glass-fronted wooden cabinets that had lots of drawers and cubby holes. It looked more like an old-fashioned pharmacy than an art supply store, and, instead of selecting items yourself, you had to ask Mr Poole for assistance. And you had to make yourself heard, for Mr Poole's ears were not as sharp as his sartorial sense.

If you asked for a #84 nib (which is what Kourtney needed), Mr Poole would lean in and study you closely. Peering, really. His eyebrows seemed to have opinions of their own. 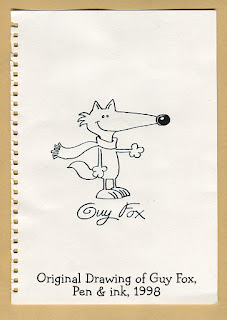 "A number 84 nib?" his eyebrows would query, as he jostled the corresponding drawer. "You must be a cartoonist."

Mr Poole would totter over to the other cabinet (the one with flat, wide drawers) and pull out a stack of paper: scraps, mostly – birthday greetings from Charles M. Schulz, a note of thanks from Ronald Searle, a doodle from Mel Calman – that formed a treasure trove of drawings and messages from illustrators and cartoonists who'd relied on Mr Poole for their supplies. He’d let you take a peek, until his eyebrows decided it was time to settle the bill and send you on your way.

With that kind of pedigree, those #84 nibs were bound to create something wonderful. (For the record, we think they did!)

Guy Fox, as you see him here, took shape that evening.


PS. Lots of people ask: Where did the name 'Guy Fox' come from? Other people assume that a man named Guy Fox is our founder and CEO (which is a whole 'nother story!). Like many things in our organisation, the name originated with a child. When Kourtney's nephew Carson, who was four years old at the time, learned the story of Guy Fawkes and the Gunpowder Plot, his little ears heard 'Guy Fox'. He couldn’t quite understand why a fox would want to kill the king. As they unpicked his confusion, Kourtney thought, “Hmmm, this might make a cute cartoon character, who could teach history to children.”

And in that instant, Guy Fox was born.