A History of a Charity in Twenty Objects - #3 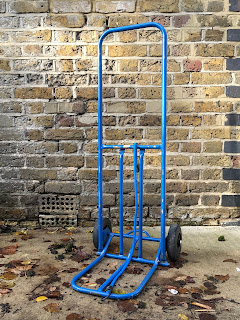 #3. Blue Trolley (May 2000)
What you see here is our Transportation Department – our battered, beloved blue trolley.

When Kourtney applied for that grant from the Peabody Trust (Object #2), she included a budget. Having never done a funding budget before, there were bound to be some mistakes.

Indeed, that budget wasn’t even a twig compared to the robust, well-researched budgets that we submit in our funding applications now. It guesstimated the various line items and confidently stated: “I will re-work / re-design the project to accommodate the funding which is made available to me.”

For Distribution Costs, Kourtney guessed ‘£200 to £300’. After all, how much could it cost to send out 5,000 magazines to 65 primary schools? Well. A lot more than you might expect.

(In fact, distribution is one of our most expensive activities. Often, SENDING a Guy Fox book is double the cost of PRINTING one!)

As we said, there were bound to be some mistakes.

You may already know, the application was successful! Yippee!

On 23rd March 2000, the Peabody Trust confirmed £2,000 for the first Guy Fox magazine. On the 24th, Kourtney dived in – contacting printers, confirming magazine specs, researching local history, drawing illustrations, creating puzzles and designing the magazine. She found a cardboard box maker in Woolwich, who could make 65 delivery boxes, and, when the magazine was ready, she sent it off to press.

Sending out 5,000 magazines was going to be A WHOLE LOT MORE than budgeted.
Oof!

Hmmm…
How to turn that lemon into lemonade?
Do the distribution on foot, of course!

A week-long bus pass and this blue trolley cost A WHOLE LOT LESS than budgeted.

So, trolley-load-by-trolley-load, Kourtney delivered magazines to all the primary schools in Southwark.

It turns out, that budgeting mistake was an education (as most mistakes are) and a big inspiration. You see, as Kourtney delivered those magazines, she experienced the community in Southwark – passengers helping her on and off buses, residents giving her directions to local schools, teachers thanking her for the magazine, members of the public asking what, exactly, she was doing – and offering their support for Guy Fox; and, of course, the children receiving their magazines, who loved Guy Fox enough to write letters to him asking when the next issue would be delivered.

That’s when Kourtney realised, this couldn’t end after just one magazine. Whatever Guy Fox was and would become, it needed to keep a-going.

Since then, our blue trolley has been our most trusted piece of equipment.

2020 marks the 20th birthday of Guy Fox History Project, and we are celebrating throughout the year in lots of different ways. CLICK HERE to support our '2020 Vision' fundraising campaign.