Showing posts from February, 2020
Show all

A History of a Charity in Twenty Objects - #2 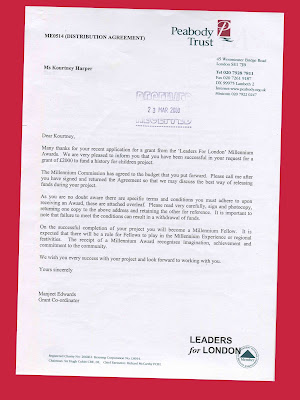 #2. Letter from Peabody Trust (March 23rd, 2000)
With those sample cartoons (Object #1), the rest was easy: Establish a charity, raise some money, recruit volunteers and start doing our work in the local community — and the rest is history!

Right?
Wrong.
Not even close. We took the ‘scenic route’.

In fact, in 1998, Kourtney wasn’t thinking about charity work at all — just work! She put those cartoons in her portfolio and submitted Guy Fox to lots of London children’s publications.

“Nope,” said Kids Time Out.
“No, thank you,” said the Funday Times.
The rejection letters piled up.Kourtney even received a rejection from the New Statesman, which was bizarre because she hadn’t sent them anything! (But that’s another story.)

Finally, there was a ‘Not-Quite-No’, from TwoCan Publications, who didn’t want the Guy Fox cartoons, but who offered Kourtney illustration work on their magazines.

Kourtney settled into a routine as a freelance illustrator — working from home, drawing cartoons and puzzles for W…
Read more
More posts